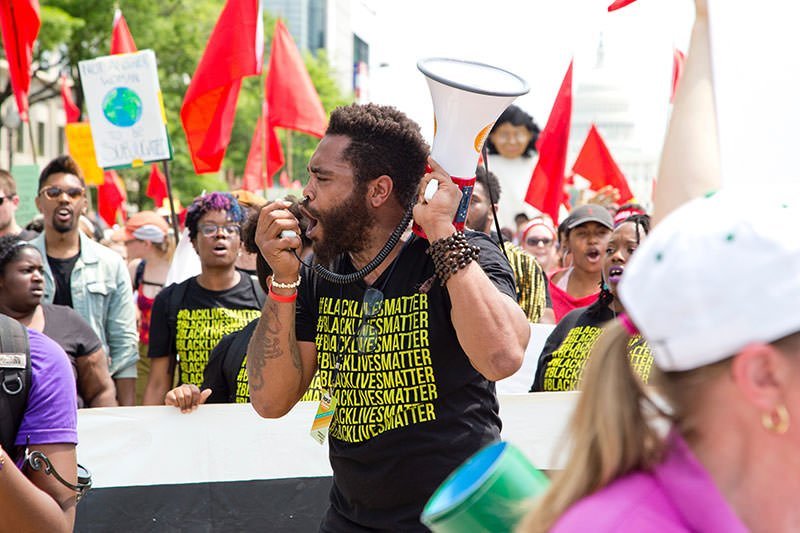 As Americans, we pride ourselves on our Constitution. In truth, the Constitution of the United States of America is the heart of our democracy and freedom.

If you have been put in a situation where your constitutional rights have been violated, you may want to know what you should do in order to remedy or address those violations. It is very likely that an attorney will be able to help you during this process.

To that end, the lawyers at Hutchison & Stoy, PLLC are here to help. Our attorneys are here to help you stand up for the rights guaranteed to you under the Constitution. As a fundamental principle of our practice, we are committed to seeking out justice for our clients.

This article specifically addresses your First Amendment rights. If you have questions about this article or questions regarding civil rights that are not addressed in this article, we are happy to speak with you over the phone or in person for an evaluation.

Do not delay in protecting your rights—contact us today!

What are my First Amendment rights?

“Congress shall make no law respecting an establishment of religion, or prohibiting the free exercise thereof; or abridging the freedom of speech, or of the press; or the right of the people peaceably to assemble, and to petition the Government for a redress of grievances.”

In essence, the First Amendment (hereinafter, the “amendment”) grants four significant freedoms to the People.

First, the amendment grants freedom of religion. This means that the government cannot: (i)  establish a government religion, (ii) compel the People to practice any religion, or (iii) prevent the People from practicing any religion. Within this right, the First Amendment guarantees that there must be separation of Church and State.

This essentially means that no religious influence shall be allowed in the making, enacting, or enforcing of the laws of the United States.

Furthermore, the amendment grants the People freedom of speech.

At its core, freedom of speech is the right to express opinions without being punished or being subjected to censorship because of those opinions. The government cannot prevent someone from expressing an opinion that the government does not agree with.

For example, as much as a president may not like criticism that he or she receives from the media, they cannot shut down or punish the media for those expressed opinions, so long as the opinions are not objectively defamatory.

The First Amendment also gives the People the right to peaceably assemble. This means that the People have a right to join together (e.g., rallies, meetings, etc.) to show support for or opposition to an issue of public policy, among other topics.

The People can also petition (i.e., complain to) the government without fear of punishment.

Are there any kinds of speech that are not protected by the First Amendment?

For example, it is not protected speech to walk into a crowded movie theatre and yell “FIRE” or “THERE’S A BOMB,” as these types of speech are likely to incite panic and cause injury to other individuals.

What types of speech are completely unprotected by the First Amendment?

Certain categories of speech are completely unprotected by the First Amendment. That list includes (i) child pornography, (ii) obscenity, and (iii) “fighting words” or “true threats.”

Child Pornography is any material that depicts any sexual conduct involving children (i.e., a minor). The child pornography does not have to be obscene in order to be unprotected by the First Amendment.

In fact, there is no constitutional right to possess child pornography even if the possession occurs in an individual’s home.

No actual harm needs to be shown in order for obscenity speech to be illegal. However, this does not mean that this category of speech is not complicated. That is because determining whether speech should be considered “obscene” is an analysis often determined by impartial judges and juries. Determining whether something is obscene will depend on the subjective views of every individual involved.

The Supreme Court has determined that fighting words inflict injury just by their very utterance. As such when someone uses fighting words, they can be punished under law, and this punishment would not violate the First Amendment.

In order for this speech to be unprotected by the First Amendment, the speech must be a threat that is an immediate breach of peace.

For example, it is illegal to walk up to a stranger on the street and tell them that you are going to murder them or cause them serious bodily injury.

What types of speech can the government place restrictions on?

In order for the government to place any restriction on speech other than child pornography, obscenity, and fighting words, a “strict scrutiny” test/ analysis must be applied by the courts.

This means that the government must show that there is

One common example is that the government can prevent the publication of locations of troops in war zones, as publishing this information could endanger the troops.

However, remember that this is the highest level of scrutiny. As such, it can be very difficult for the government to prove that the speech should not be protected by the First Amendment.

If you believe that the government has wrongfully placed a restriction on your speech, you should contact an experienced civil rights attorney. Your attorney will be able to assist you in proving that the strict scrutiny test has not been met.

Why Should I get an Attorney?

Many people do not know what to do if they feel that their First Amendment rights were violated.

If your First Amendment rights have been violated, you should immediately contact a civil rights attorney. Your attorney will be able to guide you through the process of evaluating the violation and addressing the remediation process.

There have been many court cases that center on the First Amendment.

As a bit of background, the First Amendment was ratified in 1791, and it has been the subject of many different controversies over its long lifetime. It is essential that you hire an attorney who is very familiar with civil rights issues and the history of First Amendment rights in the United States. This expertise will be a great advantage for you in your quest for justice.

The lawyers at Hutchison & Stoy, PLLC have experience litigating civil rights cases. We use this experience to advocate for our clients. We offer free case consultations to individuals who are attempting to determine what their legal rights are.

During this case consultation, we will be able to help you assess the situation so that you can decide what you should do next.

Do First Amendment issues come up in the news?

The First Amendment has been a hot button issue for a number of years, and recently it has made headlines. In fact, many people claim that President Donald Trump has violated the First Amendment by blocking Twitter users from his Twitter page.

The group that claims that President Trump has violated the First Amendment by blocking Twitter users states that Twitter functions as a public forum. They have compared the President’s Twitter account to a town hall meeting. They believe that President Trump violated the First Amendment because he has made it impossible for the individuals he has blocked to speak directly to him, which they claim is prohibiting access to a public forum.

Additionally, the account is not the President’s official account. There is a separate account that was created by the White House for the President. Whether a Court will determine that the President violated the First Amendment is still up for debate.

However, it has become clear that the First Amendment can become a hot topic overnight, even after hundreds of years in existence.

Has freedom of religion been in the news?

There have been several cases in the news recently concerning freedom of religion.

For example, a New York police officer is, as of the writing of this article, suing the New York Police Department (“NYPD”) for violating his First Amendment right to freedom of religion. The NYPD has a “no beard” policy. The plaintiff police officer refused to shave his beard during a religious fasting month. The NYPD claims that officers cannot have long facial hair because long facial hair can be used to overcome officers in physical confrontations.

In addition there are federal guidelines for gas masks that prevent officers from having long facial hair. The officer was ultimately suspended when he refused to shave his facial hair.

Another freedom of religion question that has been in the news over the past year concerns the Affordable Care Act.

Many employers claimed that their First Amendment right to freedom of religion was violated because the Affordable Care Act requires employers to provide employees with insurance coverage that includes birth control benefits.

The employers, most notably Hobby Lobby, claimed that birth control was against their religious views and that they should not be forced to provide these benefits to their employees.

What other civil rights cases can an attorney help me with?

Some of these civil rights cases can become very complicated.

The attorneys at Hutchison & Stoy, PLLC can assist you in each of these matters. We are ready to assist you in your civil rights case regardless of how complex the issues are.

We have experience litigating civil rights issues and are ready to use this experience to help you in your case.