What is a Multi Vehicle Accident?

A multiple car accident is any traffic accident that involves two or more vehicles (including, cars, trucks, and buses). Multiple vehicle accidents are one of the deadliest types of accidents out there because repeated impacts can lead to more injuries and more property damages. 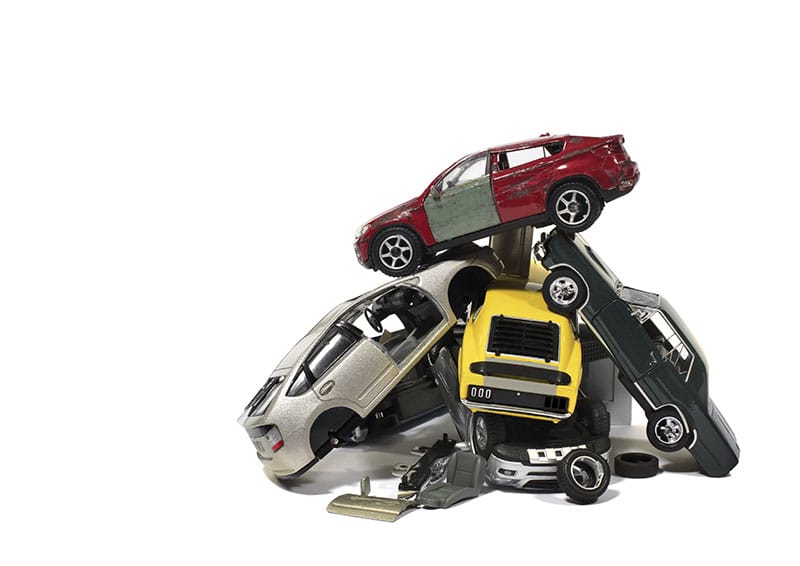 When a multiple vehicle crash occurs, there could be more than one injured party, and more than one at fault driver. This means that the process to determine who is at fault can be complicated.

What are Common Types of Multiple Vehicle Auto Accidents?

There are three common types of multiple vehicle auto accidents. One common type of multiple vehicle accident is known as a pile-up. This often occurs on highways when one driver slams on his breaks. Then a second car rear-ends the first car, and a third vehicle hits the second vehicle. This sort of chain reaction is common on the high ways in North Texas.

Lastly, a collision may force a driver into another lane due to an impact from a collision and hit a vehicle in the other lane.

Who is at Fault for Multiple Vehicle Auto Accidents?

Determining who is negligent is complicated when an auto accident involves multiple different vehicles. An investigation will need to take place in order to reconstruct the events leading up to the accident. There are three different groups that may conduct investigations of auto accidents: police, insurance companies, and personal injury attorneys. When an investigation occurs police reports are reviewed, and interviews of witnesses and passengers are conducted.

Investigations center on an analysis of the factors that lead up to the accident. First, investigators consider whether the parties in the accidents were operating their vehicles correctly. This means that the investigators will consider whether a party was speeding, following the vehicle in front of them too closely, or if the party failed to stop at a stop sign or red light. If a party fails to use a blinker or makes a sudden turn, they could be responsible for the accident. Next, a party could be responsible for an accident if they were driving their car without headlights on or if they were driving on the wrong side of the road. Lastly, reckless driving can cause a multiple vehicle car accident.

The driver could cause an accident if they fall asleep behind the wheel. This could occur if the driver is using drugs that cause drowsiness and falls asleep. An accident could also occur if a truck driver is working long hours and attempts to drive without taking a break to sleep.

The investigators will also consider whether the accident was an unavoidable accident. This means that there was nothing that could have been done to prevent the accident, and none of the people involved in the accident are at fault.

Lastly, investigators will consider whether the accident was caused by a sudden emergency. For example, a party may not be liable if they had a seizure while operating a vehicle.

Why is it important to determine who is at fault?

How can an Attorney Assist a Client after a Multiple Vehicle Accident?

As discussed above, determining who is at fault for a multiple vehicle accident is complicated. The more vehicles that are involved the more people that may be injured. Often the drivers of other vehicles will attempt to point fingers at the other drivers in order to avoid liability. An attorney can also assist you in proving that you deserve to receive compensation, and that the other drivers were at fault for the accident. An attorney can also help you deal with multiple different insurance companies.

Should I hire a personal injury attorney if there has already been an investigation by my insurance company?

If you want to win your case you absolutely must hire Esquire Christopher Stoy. His non lawyer approach, experience, service to humanity, and genuine love for the profession goes a long way. His business partner/ mentor Susan is known and highly respected in the state Texas. Chris faught for me like a friend. Not only did I win my case but, my settlement was far more then I expected. Right to this day I can call him up whenever I have an issue. The entire team at his law firm knew me and the details of my case personally when I called over the phone. Im grateful that God placed Hutchison & Stoy Law Firm in my path in my time of need. Without reservation I recommend these attoeys.

Great attoey, very intelligent and caring! Believed in our case and fought hard for fair and successful results!
Chris took all the facts of our case, worked very diligently, researched, kept us informed, answered all our questions throughout the entire case. Presented us with professional and realistic expectations. We were totally amazed and very appreciative, all the hard and sincere work of Chris and whole office.

Full confidence in Chris!!
Thanks to Chris, our mediation was a complete success! To say I’m happy would be an understatement! Chris and his coworkers really made me feel comfortable and eased my stress throughout the process! Highly recommend