Warriors For Justice Blog What Does Multitasking While Driving Mean? 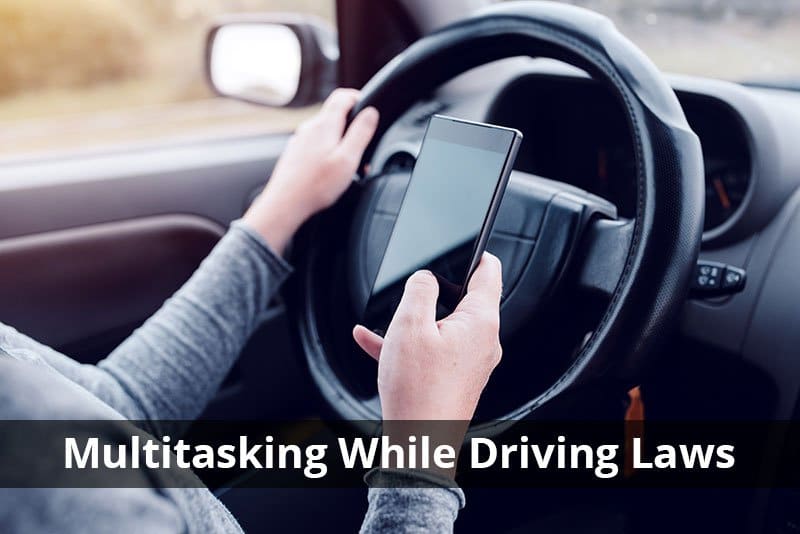 The dangers of distracted driving have been known since the dawn of the automobile. No matter how coordinated you think you are, there’s no excuse for messing with your phone or tablet while you’re behind the wheel.

No need to trust our opinion—trust the data instead.

Decades’ worth of scientific research on multitasking while driving points to the fact that driving is best done when your attention is undivided.

If you’re distracted, you’re always going to be worse off for it.

The effects of multitasking while driving include:

There’s no denying it: multitasking makes you a worse driver.

In this article, we’ll take a deep dive into the effects of multitasking while driving, the research behind it, and how you can do your part to combat distracted driving and make our roads a little bit safer.

We’re often asked, “what does multitasking while driving mean?”

The answer is straightforward: multitasking while driving is any time you’re operating a motor vehicle while performing a secondary task unrelated to the act of driving.

In other words, there is some degree of subjectivity when it comes to determining what is or isn’t multitasking while driving. As a rule, however, if you ever doubt whether your driving is considered “distracted,” you can assume that it probably is. If you have to ask, there’s your answer.

Examples of Multitasking While Driving

If you drive while also performing any of these secondary tasks while behind the wheel, you should immediately recognize that your behavior is distracted driving:

In Texas, distracted driving has an explicit definition codified in law.

We’re frequently asked, “how does Texas define multitasking while driving?”

The State of Texas considers any driving featuring an activity that “takes your attention away from driving” to be distracted driving.

Therefore, eating, texting, shaving, or tinkering with a navigation system to be distracted driving.

Sadly, many of Texas’s 500,000 annual auto accidents occur as a result of distracted driving. Although some distracted driving activities are more conspicuous and enforceable than others (e.g., talking on the phone), to be on the safe side, you should always eliminate secondary tasks while driving and keep your eyes on the road.

The Texas Department of Transportation has issued a statement advising drivers always to err on the side of caution. As the Department states, it’s still a good idea to “drive and use your cell phone later” rather than do both at the same time.

How Dangerous is Distracted Driving?

A 2010 study by the National Safety Council found that drivers who were using their phones (i.e., texting or driving), were responsible for 21 percent of all auto collisions or accidents in the United States.

As smartphones have become more common since then, we can only assume that even more auto accidents are caused by cell phone usage while driving.

An earlier study by National Public Radio found that teenager drivers who were distracted had significantly impaired cognitive capacities. In other words, distracted teens have a fraction of their mind at their disposal when they were using their phones while driving.

Whenever we perform a task as important as driving a vehicle, wouldn’t you agree that it’s important we use our minds to the fullest extent possible?

It’s a common misconception that distracted drivers are better than drunk drivers. Distracted drivers, however, are hardly different from drivers with high blood alcohol content (BAC). The University of Utah found that the overall reaction times of drivers on their cellphones were actually slower than drivers with a .08 BAC, which is above the legal limit in all US jurisdictions.

It’s a scientific fact that driving while distracted is dangerous—and not just a little risky, it’s just as dangerous as drunk driving.

The Roots of Driver Inattention

It should come as no surprise that driver inattention kills. Only driving while under the influence of drugs or alcohol comes close to causing as many car accidents as texting and driving. It’s no wonder, then, why rookie drivers often refuse to listen to music on the radio or hold conversations while learning how to drive a car.

If you can remember your first time driving a vehicle, it was probably with a parent in an empty parking lot, open field, or a backcountry road. You didn’t have music blaring, your phone on the dashboard, or have any commotion going on in the car.

There’s a good reason behind that: it’s difficult to learn or be responsive while dividing your attention between multiple stimuli.

Experts classify inattention as one of four leading causes of serious car crashes, alongside speeding, fatigue, and drunk driving.

However, inattentive driving is often considered to be less risky than those other factors, which causes more drivers to drive while distracted because they think it is socially acceptable.

Distracted Driving Statistics: What You Need to Know

Cell phone use while driving is a pandemic issue that’s only getting worse.

To illustrate the extent of the problem, we’ve listed multitasking while driving statistics below.

For your convenience, we’ve grouped each statistical category into various sections.

US Distracted Driving in 2017: A Retrospective

There’s no denying that distracted driving is a grave concern in the State of Texas, as well as the rest of the United States.

However, the data suggests that Texas is one of the worst states for distracted driving.

It’s safe to assume, then, that distracted driving is a major problem in the State of Texas.

Tragically, texting while driving caused over 2,300 serious injuries in Texas alone. In addition to these injuries, nearly 400 fatalities in Texas were caused by accidents related to distracted driving.

Experts suggest that nearly one-fifth of all auto accidents in Texas are caused by distracted drivers who cannot fully pay attention to road conditions.

In the State of Texas, it is now illegal to drive a vehicle while texting.

According to the new law, which was passed in September 2017, drivers over the age of 18 are now outright banned from using electronic devices to “read, write, or send an electronic message” as the vehicle is moving.

Drivers are only permitted to use their phones for texting or messaging when the vehicle is stopped or if the driver has a reasonable belief that they are in an emergency.

However, there is ambiguity as to how the courts will interpret the term “emergency” and how they will identify the factors that constitute an emergency situation.

Interestingly, there are no codified exceptions for minors who are driving a vehicle that has stopped.

In other words, underage drivers cannot use their cellphones to talk or text, even when their vehicle is no longer moving.

However, the emergency exception still applies to minors.

What Can You Be Fined For Texting and Driving in Texas?

Under the new law, the fines and penalties for texting and driving vary according to one’s criminal record and their driving history.

First-time offenders can expect to pay for a misdemeanor offense punishable with a fine of up to $100.

Repeat offenders are reliable to receive a fine of up to $200.

If a driver causes an accident when texting and driving, they may be liable for paying damages to the victims.

Accidents that cause serious injury or death can result in a Class A misdemeanor punishable by one year of jail time and a $4,000 fine.

Most late-model vehicles come with hands-free smartphone capabilities built into the infotainment console. These devices are designed to eliminate the driver’s need to operate their smartphone manually while driving. To prevent multitasking while driving, hands-free devices should be used at all times behind the wheel.

There are a host of features that hands-free smartphone devices can offer drivers.

For example, most devices include push-to-talk functionality, voice-operated AI assistants, speakerphones, and intelligent text-to-speech translators. In other words, they allow the driver to use their smartphone to easily send and receive messages without having to physically touch the device.

Multitasking While Driving: Not Worth The Risk

Tens of thousands of lives are claimed every year due to multitasking while driving.

These questions prove that too few of us understand distracted driving and recognize the seriousness of the offense.

It is a myth that you can drive safely while multitasking.

Instead, the scientific evidence is clear that drivers should be solely focused on the road if they want to maintain a safe reaction time. Therefore, it’s important that we all do our part to eliminate the dangers of distracted driving by keeping our phones, food, and fiery arguments far from the driver’s seat.

Were you in a Car Accident due to a Distracted Driver?

If so, the Fort Worth car accident lawyers at Hutchison & Stoy can help with your case. We will help answer any questions you have, talk to the insurance companies, and make sure you get the proper treatment and compensation.

Hutchison & Stoy also has a law office in Lubbock if you are located closer to that location.

Our team of attorneys and staff and here to help. Give us a call or submit the contact form to get any of your questions answered today.